Eric Hobsbawm’s (b. 1917) autobiography Interesting Times: A Twentieth-Century Life (London: Allen Lane, 2002), ought to be on the “must read” list of every thinking Christian. It would also make a great text for theological colleges like Fuller in the States and Regent College in Canada. Well known as an unrepentant Jewish Communist and excellent historian Hobsbawn casts his critical eye over the turbulent history of the twentieth century with shrewd and insightful comments. 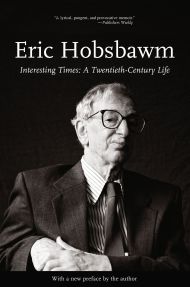 Unimpressed by the sexual revolution of the 1960’s he reminds his readers that in the past “rulers kept slaves and the poor quiet by encouraging sexual freedom among them and, I might have added, remembering Aldous Huxley’s Brave New World, drugs (Hobsbawm, 2002:250). Similarly, he was equally unimpressed by “left-wing academic fashions” (Hobsbawm, 2002: 303).
What I particularly liked about his book was his comments on his own academic career which he reminded his readers got off to a late start. He writes “I had begun to publish books only in my forties, and by the time I could actually call myself ‘Professor’ in Britain, I was in my middle fifties.” Encouragingly, he adds “when most professionals have got as far as they, and the world, expects them to get in their career …” (Hobsbawm, 2002:f302).
On the next page he reminds his readers that as a Communist he was part of a cultural ghetto. Then, surprisingly, he identifies himself with “another characteristic twentieth-century cultural ghetto, the Roman Catholic community in Britain.” If anyone doubts this he tells them to reflect on “G. K Chesterton, the dimension of whose talent have been concealed from non-Catholics by the very closeness of his association with the Church.” To prove his point he notes that the Italian journalist and well known novelist, Italo Calviono (1923-1985), “once said it was his ambition to become ‘the Chesterton of the Communists.’” (Hobsbawm, 2002:303).
This is a fascinating book that offers numerous timely insights into twentieth century history, intellectual currents, cultural fads and ordinary life. It also reveals another side of Hobsbawm that of the jazz enthusiast and music critic. No doubt Theodor Adorno (1903 - 1969) must have turned in his grave at the publication of this down to earth book.
Posted by Christian Reviews at 11:39