Padres In No Man's Land

Padres in No Man's Land: Canadian Chaplains and the Great War

One of the books I ran across when researching my upcoming book on funerals was the second edition of Duff Crerar's Padres In No Man's Land: Canadian Chaplains and the Great War.  My reasons for picking it up were two-fold:  First, I wanted to know more about how clergy have functioned under combat conditions.  To be more specific I wanted to know how they did things like bury the dead while under fire.  Second, I've always been curious about the place of Christian clergy in combat.  How do people committed to and serving within a religion focused on peace and non-violence wear a uniform and support those who are doing the fighting?

Crerar addresses this question and so much more in Padres in No Man's Land.  He does so by introducing us to the clergy who joined up and made their way to Europe to be with the troops.  He describes their work and the many places in which they lived and served.  He tells us about their visits in hospitals and the trenches.  Through his words we get a sense of what it was like praying over the wounded and dying.  We're offered a glimpse of what it was like to fall into the mud and water of a shell hole or enemy trench.  Crerar also surveys the organization and leadership of the people leading the chaplains as they muddled through the slaughter and wreckage.

The timing of this edition is appropriate given the centennial observance of the beginning of the First World War (Or the so-called "Great War").   It's also timely given some of the struggles facing our churches in the present day.  Perhaps one of the most frequently asked questions within the church these days is "How can we minister to people in the 21st Century?"  For me, the key to answering this question lies in the trenches and dressing stations of France.  Most of the young men fighting that war wanted little, if anything to do with religion.  They certainly didn't want anything to do with the chaplains.  But given these walls of resistance the effective chaplains found a way through so that they could share their message and do their jobs.  For one thing, they quickly found out how important it was to provide a comforting word or cup of coffee at the opportune moment.  They also discovered the value of communication and listening.  Even with the most hardened veteran there were still moments when the chaplain could have his say and make a point.  There may still be those moments in our present church lives.

This is why I am recommending Padres in No Man's Land to scholars, church leaders and everyone interested in both this part in Canadian history and the place that clergy had in the war effort.  It's an excellent survey of the hard work done by so many Christian clergy.  It's also an excellent example of how we can break through the walls of our own day and minister to the spiritual and nonreligious people around us.  There's something in it for many of us so I commend it to each and every one.

Posted by Academic Reviews at 12:36 No comments:

Review of A History of the United Church of Canada 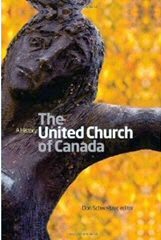 A History of the United Church of Canada
Edited by Don Schweitzer
Published by Wilfred Laurier University Press (2012)
Price: $39.95 (Cdn)

Edited by Donald Schweitzer this collection is an effort to survey the chronological story of the United Church.  This collection also introduces and discusses key issues, decisions and challenges that the United Church has faced throughout its history.  Perhaps most important of all, it helps name those seeds that have helped contribute to the pending death of the denomination.  These seeds may surprise readers.

The first seed I'm referring to is one of the principal motivations behind the creation of the United Church.  It's also something that remained a large part of United Church thinking throughout its early decades.  I'm talking about a sense of entitlement displayed by groups and individuals throughout the United Church's history.  When it was envisioned and created one of the main hopes for and expectations of the United Church was that it would become a "state church" that would reflect Canadian values and hopes and dreams.  There seemed to be a hope that the vision of the United Church would be somehow consistent with the vision of Canada as a nation.  It was also hoped that the United Church would be a real player on the world stage, especially where church unity was becoming such an important concept.  These hopes and expectations were realistic in their time but they ultimately "stalled out" as the denomination ran into challenges presented as early as the 1950's.

One of these challenges was the changing growth pattern of the United Church.  As expected, the United Church grew in its early years but it simply did not grow as fast as it needed in order to achieve its desired national church status.  Not only did it not grow according to plan it can also be argued that it didn't really mature the way it should have either.  A lot of compromise went into the founding theology and structure of the United Church.  Even though there's been some pecking around the edges of the overall structure of the denomination it remains the same as when it was created.

Another challenge was the apparent failure to sell the uniting vision with ecumenical partners such as the Anglican Church and Disciples of Christ.  Without these partners the United Church couldn't achieve the breadth of theology and practice necessary to achieve the dream of being a national or state church.  The failed effort to join with the Anglicans is especially troubling because of the lost opportunity to create bishops who would provide the regional leadership necessary to grow the denomination and help it mature.

If readers want to identify still more seeds of the United Church's decline and pending death they need to look no farther than p. 85 and the numerical decline of the number of young people in the denomination and the shortage of candidates for the clergy.  What surprises me here is that this decline began in the 1950's.  Of all the decades in the 20th century the 1950's would be that time when one could expect the church to be strong and thriving.  It turns out that it wasn't and this should be food for thought.

Even with this decline, however, there are some areas in which the United Church continues to be strong.  One area of strength is our work with Aboriginal people and communities.  While there have been serious bumps in the road we seem to have developed a rough partnership where we can address and resolve justice issues and concerns in some realistic way.  While it may border on obsession the United Church has also been effective ministering to the gay and lesbian and transgendered communities.  Anyone who experienced the debates about the ordination of practicing homosexuals know the extent of how much these decisions and commitments cost the denomination.  The problem with these two strengths, however, is that the issues are not unique to the United Church.  Both aboriginal and gay people can access resources and help beyond the church.  And effectiveness in these areas is simply not enough to change the denomination's future.

In the not too distant future the United Church will die and the seeds for this death can be found throughout its history.  A History of the United Church of Canada is a concise, thorough and critical resource that offers us a great deal of insight into this history and an even deeper appreciation of the challenges we face in the present.  I commend it to each and every one.
Posted by Christian Reviews at 23:05 No comments:

As a student of Canadian history I find myself reading and discovering a number of surprising things about our nation's past.  Perhaps one of the biggest surprises I've experienced in recent years has been the place of Prairie Bible Institute in world affairs.  Since the 1920's Prairie Bible Institute (Or P.B.I.) has graduated missionaries who have touched the lives of countless people in many nations around the world.  For the longest time when people in places near and far heard that a visitor was from Canada their first thoughts were of P.B.I.  They would ask how things were in Three Hills.

In writing Training Disciplined Soldiers for Christ Tim Callaway describes how things have been in Three Hills.  He offers a detailed account of P.B.I.'s history and its influence on the people who went to the distant corners of the planet in an effort to live out God's calling upon their lives.  Callaway writes about the overall vision of P.B.I. and the people who helped fulfill this vision.  He also describes how American fundamentalism inspired and influenced much of P.B.I.'s work.

Even though he spent much of his early life at P.B.I. and qualifies as somewhat of an "insider" Callaway doesn't pull any punches and this is perhaps one of the main strengths of Training Disciplined Soldiers for Christ.  Whether it's evaluating the work of Leslie Maxwell or critiquing the scholarly efforts of folks such as John Stackhouse Callaway is structured, thorough and clear.  His material is grounded in extensive research and this is evident in the extensive footnotes on almost each and every page.

While we may be tempted to skip the footnotes I would encourage readers to check out each and every one.  If I have one concern about the book it's that much of the most important material Callaway has to offer is in the footnotes.  There are some insightful quotes and observations at the bottom of each page and well worth the read in and of themselves.

In terms of Training Disciplined Soldiers for Christ's overall structure Callaway was wise to include chapters offering definitions to important terms such as evangelicalism and fundamentalism.  He introduces us to the key players and leaders behind the creation of P.B.I. and it's life throughout the better part of this past century.  He reviews the literature that fed and inspired both the leadership at P.B.I. and the Christian community that supported them.  He also introduces us to the key theological ideas that helped form the message graduates would take to their mission stations.

This is a thoughtful and accessible book that will be enjoyed by a wide variety of readers.  Students and instructors will find Training Disciplined Soldiers for Christ and important contribution to the history of Canada.  Church leaders and lay people will all find the material an informative, inspiring and challenging to church history here in western Canada.  Readers will also discover how people affected by one small Bible college in a remote prairie town could have such an influence over much of a planet.

I commend it to each and every one.
Posted by Christian Reviews at 22:53 No comments: